Contributed by: Joe Burns. Joe has been involved in social justice issues for many years and is currently Treasurer of Pax Christi UK.
We must ' keep on keeping on' about nuclear weapons

With the demise of the Soviet bloc in the late 80’s the fear of a nuclear holocaust receded for a few years only to be replaced by a fear that a terrorist group of some sort would get its hands on such a weapon. More recently, with the likes of the expansionist Vladimir Putin, the belligerent North Koreans and the erratic President Trump, I think people are getting a bit more edgy.
This year the dropping of the first atomic bomb, on Hiroshima, falls on a Sunday (Aug 6) – closely followed by the anniversary of the nuclear bombing of Nagasaki on Aug 9. We could, and should, at least remember these horrific events in our liturgies on that Sunday. 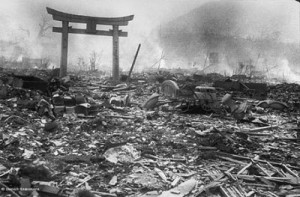 In the first four months following the dropping of the atomic bomb on Hiroshima somewhere between 90,000 – 146,000 people were killed. Inevitably, most of the casualties were civilians. Even if you accept that there can be a ‘just war’ under certain circumstances, these circumstances cannot be applied to nuclear weapons or nuclear war, since these weapons are incapable of distinguishing between combatants and non-combatants, or even between belligerent countries and neutral countries. They just kill everything within a certain radius and farther away people may survive the initial blast only to die at a later point from radiation sickness. As we know from the Japanese experience, many people survived for a number of years but then succumbed to cancers brought on by their radiation exposure.

In a message to the UN about nuclear weapons Pope Francis said in March of this year that ‘the strategy of nuclear deterrence is not an effective response to today’s threats to peace and security: terrorism, cybersecurity, environmental problems and poverty.

“Peace must be built on justice, on integral human development, on respect for fundamental human rights, on the protection of creation, on the participation of all in public life, on trust between peoples, on the support of peaceful institutions, on access to education and health, on dialogue and solidarity. The world needs “to adopt forward-looking strategies to promote the goal of peace and stability and to avoid short-sighted approaches to the problems surrounding national and international security,”
He went on to say that the complete elimination of nuclear weapons is “a moral and humanitarian imperative” that should prompt people to reflect on “an ethics of peace and multilateral and cooperative security that goes beyond the fear and isolationism that prevail in many debates today.”

The Good News is that just in the last couple of weeks 122 countries endorsed a UN treaty banning nuclear weapons. The Bad News is that the UK did not even send a representative to the discussions about this treaty. Overall, I think it is good news – a step on the road to completely banning nuclear weapons – as we did with chemical weapons 45 years ago. To paraphrase Alan Bennett: Let’s keep on keeping on about it.

It remains a permanent warning for humanity to reject war forever and to ban nuclear weapons and every weapon of mass destruction.

« The Nonviolence of the Gospel » Eucharistic Lessons from El Salvador