The UK – A Leader In Development Aid?

Contributed by: Joe Burns
The UK International Development budget is big - but are we spending it in the right way?

During 2009-10 I was a VSO (Voluntary Service Overseas) volunteer in Sri Lanka, working with a small NGO (the Business for Peace Alliance – or BPA for short). It is a network organisation of regional Chambers of Commerce. The civil war there had recently reached its bloody climax and the island was now ‘at peace’. The BPA was a contributor to a USAID programme focussed on economic development in the east of the country, which had been badly affected by the conflict and still had a military governor in place at the time. The main part of their programme was concerned with moving small businesses (i.e. most business in Sri Lanka) ‘up the value chain’. So, for example, instead of producing milk and trying to sell that to local populations, farmers were being encouraged to collaborate on buying (with USAID help) equipment that would enable them to make yoghurt or other milk-based products that would have a much higher value and could be marketed well beyond the local area; moving them ‘up the value chain’ to use the economic jargon.

The BPA contribution to this programme was to put on a series of activities designed to bring local communities together. In the rural parts of Sri Lanka villages are often largely Sinhalese, Tamil or Muslim. Consequently, there was not a lot of mixing of different ethnicities and there was certainly a lot of suspicion of ‘other’ communities as a result of the war. The 3 field workers for the BPA assigned to this programme, as well as presenting conflict reduction sessions for farmers, helped to shape elements of the programme. To continue the example above, they encouraged a Muslim village and a Sinhalese village to cooperate on building a small milk processing plant. There were not enough cows to justify one village undertaking such a project but if the two villages worked together then it would be justifiable for USAID to contribute significantly to the capital outlay and other costs. The BPA operated on the basis that conflict and suspicion between people was bad for business – as well as being bad for everyone else. By encouraging different villages to cooperate in this way, not only could they develop economically, but they would also get to know one another better and, in the long run, this would lead to reduced tensions between the two villages.
About 3 months after ‘victory’ in the war had been declared by the Government, USAID decided its priorities had changed (the country was now ‘at peace’) and the BPA was dropped from the programme. This was 12 months into what was supposed to be a 5 year programme.
Apart from the difficulties this caused the BPA it also made me re-think several aspects of development aid.

In 2017 the UK reached the target of giving 0.7 of its Gross National Product as Development Aid. In 2015 this was enshrined in law. This makes the UK the second largest contributor in the world to Development aid (in the amount of money provided).
Whilst this is fantastic, the focus on how big the aid budget is has prevented a robust debate over
• how this money should be spent,
• what it should be spent on, and
• why.
These were the sorts of things that my experiences in Sri Lanka made me re-think.

In July I was able to accompany CAFOD supporters from St Benedict’s parish when they attended a meeting with the Secretary of State for International Development, Priti Patel. The meeting was in Rothwell and was introduced by the local MP (Alex Shelbrooke) saying, that as he received so much correspondence about aid and development, he had asked Priti Patel to come to a meeting. (So all those letters to MP’s really are read – keep on doing them!).

Both Priti Patel and Alex Shelbrooke emphasised the role of UK trade and more involvement from private enterprises in UK aid programmes. Private enterprise is more effective at creating growth in economies, which then leads to raising the incomes of everyone. Their line, essentially, was one of ‘trickle down’ economics; you might get some very rich people by doing development in this way but that’s OK because everyone’s income is lifted. This is much better than having Government intervention which is hugely wasteful and inefficient.

I think their approach is wrong on two fronts.
Firstly, the trickle-down theory is largely discredited. As Pope Francis put it in 2015:

This is seen in our own country in the growth in the divide between the rich and the poor – where those with the least money have no job security and have witnessed significant cutbacks in welfare benefits of various sorts.
Secondly, the reality of using private enterprise in delivering aid programmes is that much less money goes to developing countries and that, whilst individuals may have altruistic motivations, the companies running these programmes are doing so for profit. In the Sri Lankan example, the programme was run by a US company called AECOM. The total budget for the programme was $18million. However, the amount actually budgeted for spend in Sri Lanka was $5million. The rest was spent on using consultants from the USA and elsewhere to be flown in and write reports telling the Sri Lankans how they should do things.

So, the amount of development aid, whilst it is important, does not tell the whole story – for this you have to consider how you go about distributing and using that aid. That is where organisations like CAFOD have got it right. They work with local partners and commit to those partnerships for the longer term – building relationships with communities that recognise their dignity as humans and respect their local knowledge of what will work best for them.

For a more detailed analysis of what is wrong with the current UK Government priorities for aid and how they go about delivering it I recommend taking a look at a recent Global Justice Now report that was published in July. Click on the image below to see the report. 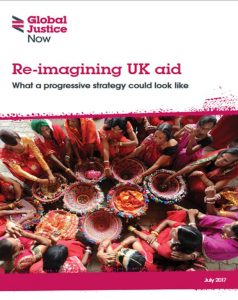