This is a precis of the talk given by Chris Cole (Director of Drone Wars UK and Vice Chair of Pax Christi UK) when he spoke at the Yorkshire Sabeel meeting in September.

Although this talk focussed on the use of drones, Chris stressed the importance of looking at alternative thinking; to challenge the idea that ‘military security’ is our salvation. It is taken as a given – an article of faith – that our security can only be achieved through the strength of armed forces, to impose death and destruction on others. This needs to be challenged.
Just over two decades ago drones were primarily used for target practice by the Air Force and Navy. Now they have become central to the way we wage war.

Chris explained that, in essence, drones are aircraft that are remotely-controlled by a crew of three on the ground – the pilot, the sensor operator and the mission intelligence controller.
Secrecy is an issue: we are not officially allowed to know where the UK fleet of Reaper armed drones are. Drone Wars UK has taken the MOD to a Freedom of Information tribunal over this and, while they will happil
give details of the siting of manned military aircraft, UK drone locations are secret. Unofficially it is known that they are based at Ali Al Salem Air Base in Kuwait. The US has for some time maintained hundreds
of armed drones in the Middle East, Africa and Afghanistan. Recently, the US has started to base drones in Europe, initially in Poland. Until recently he had believed that only three countries – the US, UK and Israel – had armed military drones, but now other countries, notably the UAE, Turkey, China and Iran had this capability. He estimated that 20 to 30 countries would regularly be operating armed drones in the next three to five years. 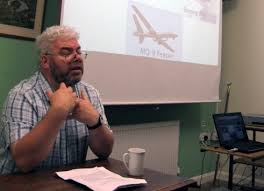 Chris said however, that modern drone warfare was conceived out of the Israeli occupation of Palestine. Remote operation, targeted killings, constant surveillance of the population, date from the late 1990’s operation in the occupied territories. The term ‘targeted killing’ was invented by the Israeli military, being preferred to ‘assassination’. It was initially condemned (but later adopted) by the US.
Chris then went on to describe the impact of the development of drones on modern warfare.
1. Making it easier for politicians to opt for war
The public don’t like to see their young men and women sent to fight in distant conflicts with unclear aims, and particularly seeing them getting killed. Drones, by taking away that political cost, make it easier for politicians to opt for use of military force, particularly when the populist press is baying for blood.
2. Drones: Video game warfare
The idea that the operation of armed drones could lead to a ‘PlayStation mentality’ in their operation was first suggested by Philip Alston, UN Special Rapporteur on Extra-Judicial Killing. Chris said that, while ‘the jury is out’ on PlayStation mentality, at the very least there needs to be much greater transparency in the day-to-day use of armed drones.
3. Enabling the expansion of targeted killing
The most controversial use of armed drones is in ‘targeted killing’, by the US, UK and particularly, Israel. The ‘technology enables the policy’, referring to David Cameron’s authorisation of the killing of two British members of ISIS. The technology was eroding important legal principles established over the last century and more, intended to set limits on the use of military force. Last year the then UK defence secretary Gavin Williamson and his colleague Rory Stewart argued, contrary to International Law, that all British members of terror groups should be hunted down and killed.
In Chris’s view this is totally unlawful and immoral, but was indicative of where drone warfare is taking the world.
4. Drones: The myth of precise and surgical warfare
Drones enable, so we are told, ‘precision’ air strikes that ‘take out’ the bad guys but leave
the innocent untouched; meaning we can achieve control over the chaos of war using new technology.
Chris pointed out however that ‘precision’ in military doctrine does not mean ‘accurate’; there is no such thing as an accurate airstrike.

Airwars, which tracks reports of civilian casualties in the Syrian war, has detailed between 7,000 and 11,000 civilian casualties resulting from all coalition bombing, in around 30,000 air strikes. The US accepts it has killed over 1000 civilians in Syria.
While early Christians were urging people to love their enemies and engage in non-violent peace-making, contemporary Roman military commander Flavius Vegetius Renatus wrote: “If you want peace, prepare for war”. Chris concluded by saying that time and again today, people of faith adhered to the Roman ‘might is right’ ideology. We should be tackling the root causes of injustice around the world – and this would address the real drivers of insecurity. Chris said that instead of pouring resources into more lethal ways of killing each other, we need to be addressing global inequality by devoting resources to achieving sustainable development goals. We should be employing our brightest and best to developing renewable energy resources and tackling climate change – a security threat to millions world-wide. 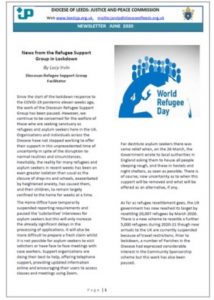 Was Jesus in favour of a Universal Basic Income?