A personal reflection on a trip to the Holy Land by Annette Mitchell, Moira Smith & John Mazzucchi at a meeting on 17 Jan 2020

About 40 people gathered at St Mary & St Monica’s Church, Cottingley, Bingley, to hear an illustrated talk on the current situation in the occupied West Bank territories and take part in a discussion.

Father Sean opened the proceedings and led the meeting in prayer. After welcoming everyone, Moira Smith described the group’s visit to Bethlehem in October 2019, where they had visited the Church of the Nativity and other sites, as part of a tour organised by the Amos Trust.
John Mazzucchi then took over to describe the group’s visit to Hebron, a divided city where tension could be felt. Annette Mitchell showed pictures of their visit to a farm about 9Km from Bethlehem, where the owners had to live in underground caves. After sharing some food more details of their trip were given.
Annette provided some additional comments about their trip:
The Amos Trust is a Human Rights organisation, committed to challenging injustice . Their ‘Taste of Palestine’ trip allowed us to meet with people, learn about their culture and food and see how life is for them living under occupation – whilst also having the opportunity to visit many of the Holy sites and churches.

It was a very different experience from the diocesan pilgrimage as regards to the types of places we visited and the people we met. We visited a refugee camp in Bethlehem, had tea in the Banksy Hotel ,

visited date farms and picked olives in an olive grove. We were able to taste freshly made olive oil after watching the extraction process in the olive factory We visited spice shops, bakeries and women’s co-operatives where we had the opportunity to buy lots and eat lots !

We saw how resilient the people are, wherever there is a barrier they find a way to surmount it. We met a Christian farmer living near Bethlehem who has been struggling since 1991 to keep his farm. He has set up a project for peaceful resistance called The Tent of Nations inviting people to his farm from the International community to be involved with projects on the farm. It was very moving when he spoke about asking our friends to visit the living stones not the dead stones.

Travelling around the towns and countryside it became very obvious how the Palestinians suffer an unequal distribution of water as water tanks were visible on all of their rooftops but not on the rooftops of settlements – where there is piped water.We were very careful using water and aware of the lack of water available to Palestinians.
Visiting the old city of Hebron we became instantly aware of the tension and presence of soldiers everywhere even on the rooftops.

Checkpoints and turnstiles are very visible and the local Palestinians have to endure these restrictions daily. A couple of children desperately tried to sell their small items in the street but the streets were mostly empty. There was a feeling of isolation and abandonment here.
We also travelled out of the West Bank towards Nazareth . Here we stayed in a Guest House called Al Hakim in the old part of the city not far from the church of The Annunciation where we all enjoyed a Palestinian cookery lesson.
We spent wonderful evenings at Liwan culture cafe very near the guest house. Here we had lovely food, drinks and even ice cream. It was a great opportunity to soak up the atmosphere whilst supporting the local people. It was the most incredible and memorable trip and the people were welcoming and hospitable throughout our visit.

This organisation works with local and international peace activists, and partners with grass-roots projects, to call for a just peace, reconciliation and full equal rights for all Palestinians and Israelis. It works in other parts of the world as well.
Each year they organise trips to visit their partner organisations, including in Israel-Palestine. More details are available on their website:
Amos Trust Website 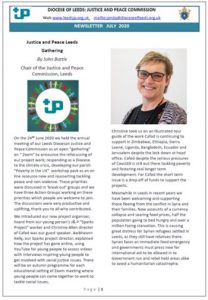 We could all do with a bit of ‘FACTFULNESS’