The American social justice activist Fr Daniel Berrigan once surprisingly recommended an instruction of the Buddha:

“Don’t just do something, stand there!”.

The impact of the Covid lock downs and enforced stoppages has apparently resulted in people watching more TV and films, reading more, clearing out cupboards and doing home improvements as the main daily fill in occupations. Meanwhile health workers, scientists, politicians and businesses are working their utmost to defeat the virus and sustain the economy.

It is increasingly clear that we are moving into a “new normal” which demands radically new economic thinking. In other words, we are now in a Covid enforced time of deep reflection. Our Churches too are locked back with restricted access with limited social supportive action in our communities and prayers at home regarded as the option. Some churches are managing to provide “on line Mass” but struggling with real liturgical participation.

Recently the Leeds Diocesan Justice and Peace Commission organised a ” Zoom Liturgy” to mark the Church’s “Season of Creation ” launched by Pope Francis, structured around readings and images from the seminal encyclical “Laudato Si: the cry of the earth and cry of the poor”. Significantly focussing on “ecological conversion”, it was not a desperate account, reinforcing a catastrophic sense of fatalism. Rather the prayers and images centred around the great “Creation Prayer” of St Francis stressing the theme of “praise” and our role as “co- creators”, whose “response- ability “could make a difference. When asked to sum up briefly what in the face of climate degradation we could now do. Sir David Attenborough replied: “Tackle waste”. Perhaps that should include “time” and instead of wasting the lock down hours we should use this time opportunity to together deepen our prayer and reflections in a new age of meditation and praise.

It can be difficult to adapt to this online, digital reflection and prayer. The atmosphere is very different when you are looking at a screen as opposed to being physically with people in a reflective space. However, at a time when we cannot participate fully in the mass, especially the livestreaming services, online video platforms offer a way of bringing people together to pray, reflect and share their experiences in safety.

At our recent ‘Season of Creation’ liturgy we were able to hear from five ‘modern prophets’ sharing their experience of hearing the ‘cry of the earth and the cry of the poor’. One of our younger prophets who is studying at university in Glasgow was able to share his thoughts on a video which we then played during the liturgy. This is meant that we heard his powerful testimony even though he was not able to join us on the evening. This was one of the advantages of a digital platform as well as the fact that people are able to join us no matter where they live and there is not the problem of transport and the added advantage of less contribution to our carbon footprint and no contribution to poor air quality. People were able to share their commitments to change something or start something having been inspired by the Season of Creation and Laudato Si. 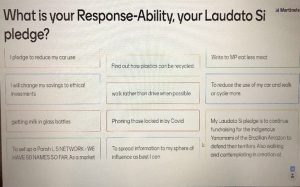 We used some software calledMentimeter, which again poses issues of creating a suitable reflective ambience but it enabled people to share commitments anonymously and the ideas and pledges people shared were positive and life affirming. Ideas included ‘Get an allotment’, ‘Not to buy fruit and veg in plastic packs’, ‘Talking to my MP re: climate change’ ‘To stop, sit still, pray’ In total there were 34 pledges made; some were on the theme of reducing car use, appreciating and reflecting on nature, to reduce plastic use, to nurture and be inspired by grandchildren. Others emailed their pledge later as not everyone was able to use Mentimeter. Reflecting on the commitments filled one with such hope that there was so many people prepared to make a difference and create a future Pope Francis describes in Laudato Si.

We ended our liturgy with a prayer from Pope Francis’ encyclical Laudato Si which reminds us of the sin of indifference but also reminds us of a hopeful future of justice, peace, love and beauty.
The feedback from participants(there were about 60 people joining in), mainly by email, was overwhelmingly positive and the Commission would like to thank everyone who took the time to get in touch. The comments were generous in their understanding and patience of technical glitches which will always threaten to occur when we are so reliant on technology, the internet and digital streaming. We will learn from this liturgy so that future liturgies are timed more effectively, with less material and more time for personal reflection.

Our next liturgy will take place at the beginning of Advent on the 3rd December at 7.30pm. The theme of this liturgy will be Poverty and it will be held online, using Zoom.  There will be prayers, reflections, hymns and opportunities to hear from those with lived experience of poverty in our communities.  Keep an eye on our events page to find out the full details.