Commemoration of the Women Martyrs of El Salvador

Contributed by: Sr Gemma Simmonds
The death of the women martyrs of El Salvador lays wide open, even today, questions which continue to challenge us.

On December 2nd the Romero Trust, with the support of CAFOD and Pax Christi, organised a liturgy to commemorate the 40th anniversary of the assassination of 4 Catholic missionaries in El Salvador by 5 members of the National Guard.. Three were Maryknoll sisters and the fourth a lay missionary. The story of these women was subsequently made into a film: “Roses in December”. The following address was given at that service by Sr Gemma Simmonds and is reprinted here with permission.
From the earliest time in the church’s history the martyrs have been commemorated by consecrating altars that enclose within them the bodily relics of those who died for their faith. There are no such altars for the women martyrs of El Salvador, but we come together this evening to venerate their memory and to acknowledge a church nourished on their blood and built on the strong pillars of their sacrifice. 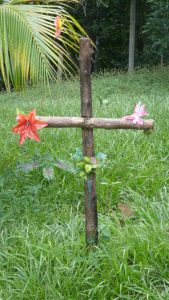 No such honour was done, no such acknowledgement made on the day when the violated and bullet-ridden bodies of Maura Clarke, Ita Ford, Dorothy Kazel and Jean Donovan were discovered buried in a shallow grave not far from the airport where they had last been seen alive. Like many other women across the world who fall victim to the brutalities of armed conflict, these martyrs for their faith were raped before they were murdered. It may seem strange, even shocking for me to dwell on this aspect of their death, but I do so in order to honour them.
The Catholic Church has laid great emphasis on virginity and the protection of chastity as a sign of holiness. Whether the virgin martyrs of early Rome like St Agnes and St Emerentiana, nuns like St Therèse, the Little Flower, or young lay women like Maria Goretti, the emphasis has been on purity, with all the questions that that raises for many modern women about the glory and complexity of human sexuality and our concept of holiness. We are not only here to honour the American missionaries to El Salvador. We are honouring also the many women: catechists, and those who evangelised simply through the witness of lives lived for others, who also died during the horrors of the military repression. Many of them were wives and mothers, others perhaps made different life choices, but their bodies were in every way sacred: blessed, broken and shared in their generous witness to justice and their firm resistance of evil. Three of the American missionaries were religious sisters, vowed to chastity. Jean Donovan was engaged to be married. The National Guardsmen who raped and killed them may well have thought that they were subjugating and humiliating these women, taking something away from them. But in perpetrating these appalling violations they were also uniting them in the closest possible union with Christ himself.

Theologian David Tombs has written vividly of the custom prevalent in ancient Rome of sexually humiliating conquered kings and military leaders before executing them. He points to the fact that in the Gospel narratives Jesus is stripped naked no less than four times and paraded in front of hundreds of soldiers. He suggests the possibility that Jesus was sexually abused and humiliated as part of the preparation for his death. This would not be unusual when dealing with a high status prisoner. The Romans liked to reduce his status as a leader and a man in order to terrify his followers into submission. In its subsequent depictions of Christ’s crucifixion and suffering the Church has preferred to draw a veil of discretion over this brutal possibility, as it often draws a veil of discretion and forgetfulness over facts which don’t entirely fit with our stylized notions of holiness. Whatever the factual truth of this, the ancient creeds also teach us that, in his humiliation and death, Jesus descended into hell. It was there that he was waiting to be met by the women we commemorate today.
They are not only remembered and venerated for the heroic witness of their death. They are remembered and venerated for the passion with which they gave their lives to the suffering people of El Salvador. It was a passion inspired by the courage of the religious leaders of the pueblos where they ministered. Shortly before her death, Maura wrote to a friend,
‘[The campesinos] are the most rugged and faith-filled men and women […] It takes courage for them to continue any celebration of the word or meetings because anyone suspected of being […] attached to the church is in serious danger […] The poor really strip you, pull you, challenge you, evangelise you, show you God’.
The missionaries and campesinas had the courage to remain alongside the crucified people of El Salvador despite knowing the mortal danger to themselves. They entered into the worst hell that human beings can devise for one another in terms of cruelty, violence and deliberately inflicted poverty. It was here that they met the crucified Jesus. He himself tells us that whatsoever we do to the least of his sisters and brothers we do to him. If we allow it to, their need strips us, pulls us, challenges us, evangelises us and shows us God. But few of us allow ourselves to be challenged and called in this way. Few of us find the heart, as Maura, Ita, Dorothy and Jean did, to give so much of ourselves to others or to Christ in others.
The church where the missionaries were based- a memorial to them in the foreground. ©Joe Burns
These martyrs and their families were also stripped of justice in the aftermath of their death. The most shameful thing that happened to them was not the manner of their death but the way in which their own government, the Salvadorean government and some Church leaders were willing to compromise and deny the reality of their own collusion with the deaths of these and other martyrs like Oscar Romero in order to safeguard what they thought of as the overriding value of their own political and ideological goals.
The death of the women martyrs of El Salvador lays wide open, even today, questions which continue to challenge us. Our rigid notions of holiness may lead us to forget the embodied beauty of the human person and the dignity that we all carry as children of God, irrespective of what happens to those bodies. Our desire to stay safe can lead us to make alliances that are profoundly ungodly, when all the while the poor come dangerously close to Jesus as he lives deeply immersed in the very margins of society. Maura, Ita, Dorothy and Jean found among El Salvador’s poor something worth living and dying for. Those who killed them thought they were taking away the value of their lives. What they and those who colluded with them did was to show for all the world to see the shining glory of those who dare to go down into hell with the crucified Jesus only to rise with him again for all eternity.