The Church, 'Family Values' and the scandal of family poverty

Contributed by: Joe Burns. Joe has been involved in social justice issues for many years and is currently Treasurer of Pax Christi UK.
Are we chasing the wrong priorities when it comes to promoting family life?

The Catholic Church would self-describe as a strong advocate of ‘family values’: the importance of bringing up children in a loving atmosphere with two parents, being open and generous towards one another, praying, doing things together and supporting one another throughout life so that all members of the family can enjoy the full dignity that God has given them. In so doing they become closer to God through the love that they experience in family.

Of course, that is what life is like in an idealised world – not the world in which we actually live. The reality is that for many people family relationships are complex. In many marriages the relationship breaks down. For most families today both partners need to be in work in order to have enough money to enable them to even try to live a life with dignity. In turn, this leads to complications about childcare using both paid childcare and members of the extended family. For single parent families these problems are only magnified. 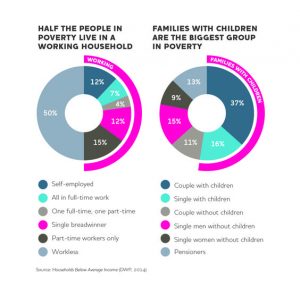 According to the DWP 3.9 million children (28%) are living in poverty (DWP 2016- Households below average income: 1994/95 to 2014/15).
The mantra from the Government is that people must get into work. However, work does not provide a guaranteed route out of poverty in the UK. Two-thirds (66 per cent) of children growing up in poverty live in a family where at least one member works. These are shocking statistics for a rich country like the UK.

So what are Catholics doing about it? All the work of helping people to make family life work better – by organisations like Marriage Care or the UCM – largely goes unnoticed, as does the tremendous family support given by SVP conferences up and down the country. The compassion and understanding shown by the workers and volunteers in these organisations is humbling.

As with a number of other issues today (such as help for refugees and migrants) we need to ask ourselves when compassion is no longer enough. At what point does helping people actually become part of the problem? – in that it enables Governments to continue to ignore the root causes of the problems or to actually compound them.

Three years ago the Commission raised this question in relation to Food banks. At the time the latest figures, from 2013, showed over 900,000 visits to food banks. In 2015 this had grown to 1.1million – and this is only the statistics from the Trussell Trust – which, though excellent, underestimate the situation as there are other local organisations that are also providing similar services.

A much bigger threat to family life than the tragedy of abortion or people entering civil partnerships is poverty and the loss of human dignity that it brings: missing meals so your children can eat, a life without choice, children who are mocked for their old clothes. If we, as Church, are really concerned about promoting family values then family poverty is a set of issues that we need to tackle in a big way. Giving a bit more when there is an SVP collection in your church might be a start – but it cannot end with that. When you have a small scratch an Elastoplast might be all you need; the family poverty in this country is fast becoming a festering wound and needs more drastic treatment. As Church, we need to start calling on our national and local Government representatives to enact policies that help families to obtain enough to live on and a home where they are not in danger of losing it on one month’s notice.

The mainstream press is now coming out with many stories relating to the hardships encountered by people who have to apply for Universal Credit. It is clear that this system is built on a false underlying set of assumptions about family life in Britain today. We in the Catholic Church in the UK run the same risk – of chasing the wrong priorities, focusing on the personal morality aspects of family life and ignoring the far greater danger from the loss of human dignity caused by living in poverty.

« Tackling UK Poverty » With the Poor