On Tuesday 12 February the Parish of Our Lady of Lourdes & St William’s (Parish of St. Blaise), Ingleby Road, Bradford, hosted another very successful meeting for the Diocesan Refugee Support Group. The spacious parish hall was packed with nearly 100 people and at least 15 organisations that support refugees and asylum seekers in and around Bradford were represented.

The opening presentation on Community Sponsorship for Refugees was followed by a series of shorter presentations, introduced by John Battle, Chair of the J & P Commission, to give a flavour of the volunteering possibilities after which there was time for refreshments and plenty of conversation. As Carol Hill, Director of Catholic Care, said, “There was such a buzz around the room and people simply did not want to go home.” Matt Henderson from CHAS@St Vincent’s later emailed to say, “We really enjoyed and benefited from taking part yesterday. It was great to see such a good turn out.”As at last year’s meeting, Sean Ryan, the Caritas National Coordinator for Community Sponsorship, gave a presentation on the Government’s Community Sponsorship scheme for the resettlement of Syrian refugee families, showing a very encouraging film made by existing sponsoring communities. Sean then introduced Paul Kelly from Settle, who is the lead for the Refugee ReSETTLEment group which is in the process of applying to the Home Office to welcome a refugee family. This was fully reported in our January newsletter.
Will Sutcliffe from Bradford City of Sanctuary gave an introduction to the situation for refugees and asylum seekers in the UK and a brief overview of the work being done in Bradford.
After this we heard from CHAS @ St Vincent’s, Abigail Housing, BEACON, BIASAN, The Good Shepherd Centre all of which provide direct support for refugees and asylum seekers, especially those that are destitute and in need of greater assistance.

Each presenter outlined the work they do and the volunteer roles that are needed to provide their services such as teaching.English, supporting weekly drop-ins, administration, arranging events and fundraising Finally, we heard from Mary Brandon of Asylum Matters, a project of the City of Sanctuary movement.She spoke about the importance of campaigning in order to change the difficult situations that are experienced by these vulnerable people in our communities, such as homelessness, lack of employment and poor access to healthcare. Those attending were then invited to visit the stalls around the hall to enquire about the volunteering opportunities that most interested them. Catholic Care’s Gianna project which works with many refugee and asylum seeker women was also present with an information stall.
As well as introducing Parishioners to the work being done to support refugees and asylum seekers across the Diocese and helping them to discover new ways to get involved, we provided an opportunity for the organisations to network and appreciate the wealth of talent and enthusiasm in the Catholic Community. 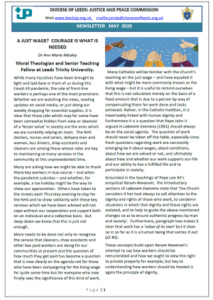 A Just wage? Courage is what is needed

While many injustices have been laid bare by Covid-19 the role of front line workers is one of the most prominent.
Contributed by: Dr Ann Marie Mealey, Moral Theologian and Senior Teaching Fellow at Leeds Trinity University
Categories Catholic Social Thought
Tags family wage,Leeds Trinity University,Living Wage,rerum novarum
Read More