This year marks CAFOD’s 60th Anniversary as an official charity. 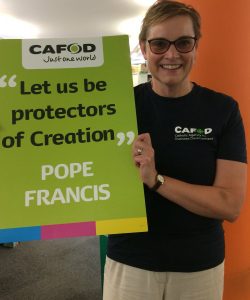 For the past 60 years CAFOD has continued to raise money and support for overseas development. From responses to natural disasters (like the famine in Ethiopia in 1984 and the Indian Ocean Tsunami in 2004), to health and justice campaigns (such as the worldwide campaign on HIV/AIDS in the 1980s, and the Cancel the Debt campaign in more recent years), CAFOD’s role has always been varied and relevant.

We reached out to CAFOD volunteers around the Diocese to find out how they think CAFOD has sustained support from volunteers and donors throughout the years.

In the mid-1960s I worked for the DAC (Development Assistance Committee) at the Organisation for Economic Co-operation and Development (OECD) in Paris.  Well paid as we were for this work which focused on the co-ordination of overseas aid from the rich countries to the developing world, towards the end of each month we received a visit in our offices from Mlle Borghese, a colleague who had set up an OECD-based Oxfam support group, and to whom we gave our monthly donations. It was an early introduction to personal giving as well as political action.

When I returned to the UK, and to my home city of Leeds, in the early 1970s, the message of the Vatican II (1962-65) was spreading, thanks to the enthusiasm of the then Bishop of Leeds, Rt Rev Gordon Wheeler, who had been present at the Council in Rome for most of its duration. Documents such as The Church in the Modern World (Gaudium et Spes) urged us as Christians to become aware of the ‘joys and hopes, pains and sorrows’ of the world around us, including those in the developing world.  Not everyone was as supportive as Bishop Wheeler; indeed, some Christians were anxious about the ‘political’ nature of the subsequent discussions and actions.

In due course I became the first lay Co-ordinator of the Leeds Diocesan Justice and peace Commission, a role in which I soon realised that to be called a communist on regular basis was a sign that the practical implications of the gospel imperative for social justice were getting through.   However, most parishioners were very sympathetic to appeals for a reformed world order which would ensure that famines were past memories, and that good educational opportunities, adequate medical care, and fair-trading arrangements were assured.  Very sadly, progress was very limited, and crises such as the Ethiopian famine of 1984 showed how far the world was (and is) from a new, fairer, economic and social order.

Meanwhile, CAFOD was very supportive of the newly established Leeds Diocesan Justice and Peace Commission, including in financial terms. (I remember going on the night sleeper from Leeds to London once to see Noel Charles, the then Director of CAFOD, for an 8 am meeting in his flat, when we discussed possible assistance whilst he fried the breakfast…).  In its turn, J & P encouraged the newly formed parish J & P groups to support CAFOD’s campaigns, family fast days etc, and to invite to parishes some of the many well-known overseas partners who came to give talks in London and elsewhere (who remembers the talk given in Dewsbury by Fr Jon Sobrino SJ from El Salvador, or that of Alex Mbatha from South Africa in Bradford?).

In time this support for overseas projects had a very beneficial but somewhat unexpected effect. People started to ask why were Christians not showing equal enthusiasm for poverty concerns in the UK.   Why were there not similar campaigns about child poverty here at home? Lobbying skills and organising methods were developed. (I first heard about Saul Alinski and his community organising techniques, which later led on to organising groups in London, Leeds and elsewhere in the UK, during a J & P visit to the Philippines).  CAFOD offered training in methods of working for change which were taken up by groups such as J&P, and were already known to the Young Christian Students, National Board of Catholic Women and many committed Christians.

As already mentioned, another of CAFOD’s key contributions was the number of visitors from the developing world who came to the UK to talk about their situation at home – and who sometimes made significant comments about the justice situation in the UK.  Such comments and work for justice overseas led people to look more clearly at injustices here in the UK, and subsequently ecumenical groups such as Church Action on Poverty and Housing Justice were formed. Later, in the 1990s, the Catholic church in England and Wales established CASC (Catholic Agency for Social Concern), now known as CSAN (Caritas Social Action Network), with support from key CAFOD staff, especially CEOs Julian Filochowski, Chris Bain, and Christine Allen.  More recently a number of RC dioceses have set up Caritas organisations concerned with a wide range of UK social issues such as criminal justice, housing, domestic abuse

It can be said that many of these social justice activities are to a considerable extent the fruits of the original vision of the women founders of CAFOD: Jacqueline Stuyt, and her colleagues Evelyn White, Nora Warmington, and Elspeth Orchard.  Our debt to them is enormous.  May they always be remembered, and their legacy maintained.

CAFOD IN THE NEW MILLENIUM

Over the years I have really enjoyed volunteering for CAFOD, it carries out such wonderful work across the world and it has been a great way for me to give something back to my parish.

I am involved in fundraising, supporting campaigns and encouraging prayer and learning activities in our Children’s Liturgy group.

It has been great to work with Bronagh at the Leeds office, she has provided fantastic support. 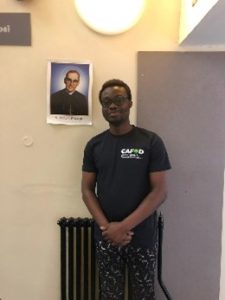 I joined CAFOD immediately after the National Justice and Peace conference in 2021. Having seen CAFOD’s stall at the conference, I drew closer to have a word with Maria Elena, who briefed me about the charity. I went back to my room that night inspired. I made my research that night and googled about CAFOD’s work. I was so captivated by the life of St Oscar Romero and from that point I joined CAFOD, rang my Diocesan Lead and expressed my interest. I joined CAFOD to put my faith in action, to also see that I can echo the voices of people who aren’t heard. The humanitarian service rendered by CAFOD to communities deserving of it is laudable. CAFOD’s 60 years journey is walk for humanity and I am proud to have a step in it. My favourite experience so far is going to schools as a volunteer and teaching the students the Catholic social teaching and inspiring the next generation.

CAFOD IN THE PARISH

CAFOD has had a very significant influence on my ministry. From fund raising to educating to formation of young people. I have been very privileged to be involved with the Live Simply award and currently am delighted to celebrate 20 years of fund raising and sharing CAFODs work with Helen Humphries in our parish. She has worked hard to share all CAFODs campaigns and dedicated herself to making CAFOD alive and accessible to all members of the parish community.

CAFOD IN THE SCHOOL

The impact of CAFOD in St Bede’s and St Joseph’s Catholic College is massive. Between our Advent charity fortnight being dedicated to CAFOD, the focus in RE lessons relating to the virtue of service, and our weekly CAFOD Club, you would be hard pressed to find a student who couldn’t tell you anything about CAFOD (even if it’s just that the Lay Chaplain was a CAFOD Gapper!). My personal experience with CAFOD, as a volunteer going into schools and parishes and the overseas visit to Uganda, has shaped much of the way Chaplaincy looks at St Bede’s and St Joseph’s. As an individual and as a College, I am proud to support CAFOD and the incredible work done all over the world.

This year the National Justice & Peace Network’s (NJPN) Annual Conference’s theme is ‘Hope is a Verb with its Sleeves Rolled Up’. (More details can be found on the events list).

When we are constantly surrounded by news of war, climate catastrophe and injustices both at home and abroad, it can be difficult to find hope.

But as we enter spring, and approach Easter, it’s important to remind ourselves of the incredible efforts people are making to work towards a peaceful and just world.

In our Diocese, the work of CAFOD and the J&P Commission have been deeply intertwined from the beginning. Since Anne Forbes sat in a Soho flat with Noel Charles, the two charities have worked together to push for change.

Over the years, the Commission has run various campaigns on areas of where it has found a need to fight for justice. This work has been done in collaboration with many other Diocesan charities and civil society organisations. (See box below).

The work of the Commission, and of CAFOD stretch back over the decades and, as we have seen, the volunteers and supporters who make such work possible, often stay for years to continue fighting for a fairer world.

But the call to work towards a brighter future is still being heard by new generations. Last year, the Commission’s SPARK project sponsored a group of young people from the Leeds Diocese to attend the NJPN annual conference. And, at the end of last year, CAFOD sponsored a youth delegation to attend COP26. This intergenerational approach to peace and justice is the only way we can ensure we succeed in bringing about the world we are striving for. As both CAFOD and the Commission in Leeds continue to draw in in new supporters from all generations and walks of life, we can find hope for the future.

So, while we celebrate CAFOD’s 60th Anniversary, and all that it has achieved over the years, we remember too how here in Leeds it has helped to support the Commission’s work. 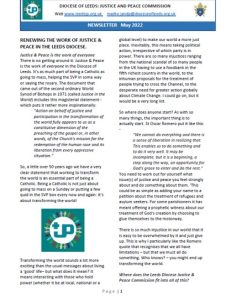