On 15th May 2022 Pope Francis celebrated the canonisation of St Charles de Foucauld. St Charles is honoured for his work on inter-religious dialogue but also for his special charism of identifying with and living among ordinary people in order to share their lives and offer support and compassion. Charles joined the Trappists, living in monasteries in France and in Syria, before seeking an even more austere life as a hermit. After his ordination to the priesthood in 1901, he lived among the poor and finally settled in Tamanrasset, Algeria. St Charles lived a life of prayer, meditation and adoration, in the incessant desire to be, for each person, a “universal brother”, a living image of the love of Jesus. His witness and his writings inspired people to follow his way of life and after his death, the Little Brothers of Jesus and the Little Sisters of Jesus congregations were formed.

Though we can’t gather in Rome to join in the canonisation celebrations, we do want to use the occasion to honour the commitment the Little Brothers gave to Leeds and especially to remember and celebrate Brother Guy, who sadly died on 5th February 2013 and who is buried Wortley.

In 1956 the Little Brothers set up a fraternity in a small house in Leeds and Brother Guy arrived in 1961. He was followed in 1972 by Brother Xavier Chevillard and the two became special friends to the Justice and Peace Commission and to all with whom they worked and lived alongside in Leeds for more than 50 years. 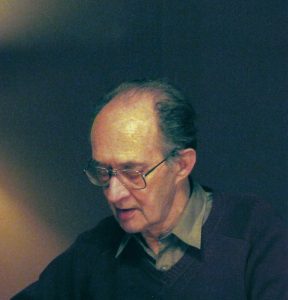 Guy was born in Lyons in 1926 and moved with his family to Paris in 1929. After the war he attended the School of Commerce and then did national service some of which was in Vietnam in the late 40s. In August 1952 Guy entered the novitiate of the Little Brothers of Jesus and spent some time in the desert El Abiodh. Guy had trained as a turner and worked as an engineer. He found work in Leeds as a chemical process worker and shop steward. As a shop steward he represented the interests of his working-class colleagues. It was a wise choice because Guy cared deeply for those who suffered injustice or were disadvantaged. As a person of honesty and integrity, with a finely tuned sense of justice as well as generosity of spirit and heart, he walked alongside his fellow workers. One work friend called him ”a double brother” which captures the essence of Guy perfectly.

Throughout his time in Leeds Guy was involved with local community projects as well as global NGOs, offering hospitality in the Fraternity house to Chilean refugees and later to Night Stop (for street homeless young men), as well as volunteering at the Development Education Centre and CAFOD. He led a working party on work for the Commission, producing a seminal booklet based on Catholic Social Teaching that informed and guided the Commission’s programmes. Guy had a powerful intellect, tempered with wisdom, a ready wit and sense of fun. Always his compassion shone through.

Lines from a letter written to Guy by his father, who had struggled to understand his son’s vocation, summed up beautifully Guy’s inspiration and legacy,

Writing to his son after he after a visit to the Fraternity, Guy’s father wrote,

“just by your presence, without saying a word, simply by identifying with the way of life of all these workers, by the way in which you welcome them, you can create this link between them and Christ… I have finally understood in a tangible, glaring way, the importance of your vocation.” So many of us here in Leeds were blessed by that gift.

Thank you Guy and thank-you Xavier!

Zoom Conversation with Br Xavier Chevillard – 24 May at 7:30pm

If you think there isn’t much about Xavier in the article above that is because there is the opportunity to join him in a Zoom conversation with Commission members John Battle and Marg Siberry.

The week after the canonisation of Charles de Foucauld seemed like an ideal time to explore both the spirituality of this new saint and remember the mission of the Little Brothers in the Leeds Diocese.

Sign up via Eventbrite. Just use the button to register and you will receive an email with the Zoom link: