22 Jun – What can we do about Palestine?

This was the title of a partnership event last week with Pax Christi in the Leeds Diocese and the Leeds Palestinian Film festival. Social justice issues are often complex, and many people do not feel that they can influence unjust situations – and Palestinian injustice is a good example of this.

At the film we showed last November, as part of the Palestinian Film Festival, someone posed a question about this and the event last week was the result. 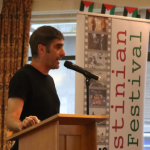 About 50 people came along to hear a range of speakers talk about the actions that they are taking. We heard speakers from Palestine Action in Bradford who, through some direct actions, have been instrumental in closing an arms factory in Oldham. From Leeds we heard about the ‘Women in Black’ group – which has featured previously in the newsletter. We also heard from the Palestinian Solidarity Campaign in Leeds and from Jenny Lynn, an Executive member of Calderdale council and Chair of Halifax Friends of Palestine.

She detailed out the IHRA (International Holocaust Remembrance Association) definition of antisemitism. Many public institutions have adopted this However, some of the examples they provide of antisemitism make it difficult to criticise the actions of the state of Israel – and, in turn, this has led to attempts to censure some university academics, not to mention Labour MP’s.

Carol Burns, of Pax Christi in the Leeds Diocese, chaired the meeting and stressed that social activism was a journey: we all have a responsibility towards situations of injustice. However, we also all have many other responsibilities and we must each decide what actions we are capable of supporting at any point in time. For some this might mean taking part in some direct action, for others it might just be talking about the issues with other people and raising awareness

Ideas for what you can do and for more background information about our topic can be found in these downloadable handouts:- 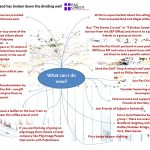 A one page slide, freely downloadable with suggestions for action produced by the Commission and the Pax Christi group in the Leeds Diocese. Suitable for use as a handout. 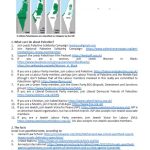 A more detailed background about the current situation in Israel Palestine for those who want more background.