WWI Centenary - Remembrance is not enough

Contributed by: Tim Devereux, Chair of the Movement for the Abolition of War and member of the Leeds Pax Christi Group
Remembrance must be an inspiration to action

Do you remember four years ago, the stunning installation ‘Blood Swept Lands and Sea of Red’ thousands of poppies flooding down the walls of the Tower of London and into the moat? When I visited, I was very moved by the hushed crowd, and the poignant profusion of blood-red poppies – one for each of the 888,246 British and Colonial soldiers slain. I found it hard to take in the sheer number of the dead (– and millions more of Britain’s allies and enemies who also died).
Never forget. 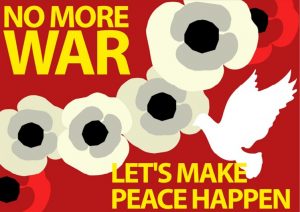 I began to think about a personal way of commemorating these soldiers; I imagined each of them, lying down – average height in those days 5 feet 6 inches; stretching out, head to toe, for 925¼ miles. I decided I’d cycle that distance, almost the length of the UK, not all in one epic ride, but doing around ten miles each day. So, from 1st May until 26th July 2015, that’s what I did.
There is nothing practical we can do for the fallen of the Great War – the ‘War to end all Wars’! However, some soldiers returning from Britain’s more recent wars desperately need help, so one of the causes I raised money for was Combat Stress, the Veteran’s Mental Health charity. Originally called the Ex-Servicemen’s Welfare Society, it helped those suffering from shell shock after WW1, so that seemed appropriate.
Never again.
The charter of the UN declared in 1945: “We the peoples of the united nations determined …to save succeeding generations from the scourge of war, which twice in our lifetime has brought untold sorrow to mankind…” The three anti-war causes I helped were: the Christian Peace Education Fund, the Movement for the Abolition of War, and Yorkshire CND.

Yet any news bulletin shows that the scourge of war is all too present in today’s world: UK bombs have been falling on Syria since 2014; British aircraft sold to Saudi Arabia are helping to kill thousands of Yemenis; according to the then Defence Secretary, ‘Britain is under threat from North Korean Nuclear Missiles’; and President Trump has walked away from the Iran Nuclear Deal, prompting Iran to prepare to restart uranium enrichment. It is very tempting to switch off the news and turn on another boxed set! But I urge you to ‘Protest and Survive’ – let your MP know your views – come to the Leeds Pax Christi Remembrance event , and this November, wear your White Peace Poppy with pride!