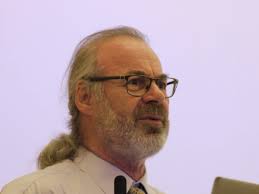 This was the title of our January webinar led by Tim Devereux, Chair of the Movement for the Abolition of War.

Tim spoke for about half an hour and the rest of the time was used in questions.

After a brief scene setting about Climate Change itself, Tim went on to explore the greenhouse gas emissions of the military across the world and the impact of Climate Change on conflict.

“More conflict in itself will damage the planet (those involved in conflict will not be able to focus on the climate, and instead will be creating more emissions whilst in conflict), therefore making it far less likely that we will reach any of the climate change Paris goals.” Tim posed this quote as a question – and not many people knew that it was from the Ministry of Defence “Climate Change and Sustainability Strategic Approach”, published in March 2021. So, even the ministry of defence acknowledge their impact on the environment.

Tim pointed out that the U.S. military emits more greenhouse gases than Sweden and Denmark. A new study [June, 2019] shows how the United States’ Military is the largest institutional emitter of greenhouse gases in the world. These emissions come from both combat and non-combat operations.

The use of some of the fossil fuels the military burns to protect the supply of oil creates an interesting paradox. 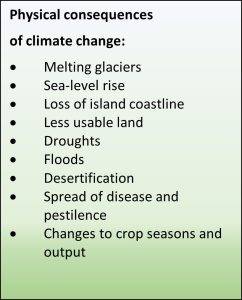 To explore the impact of Climate Change on conflict Tim looked, first of all, at the physical consequences of it. These are summarised in the table to the left .

These physical consequences then lead to consequences for the people living in the areas most affected. Their usual crops will not grow, or droughts destroy them causing food insecurity. Herders have to roam new lands for 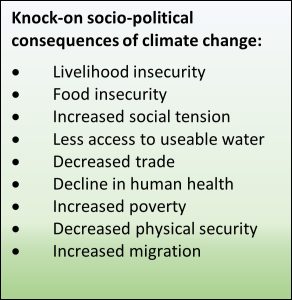 their cattle to graze – creating tensions with the people who are already inhabiting those lands. The physical consequences lead to a set of socio-political consequences and many of these raise tensions and are the trigger for conflicts.

One example that Tim gave was of the conflict in Syria. This is often presented as a response to a brutal regime and the events surrounding the Arab Spring. However, also playing a part were

From 2006-2011, up to 60% of Syria’s land experienced, in the terms of one expert:”the worst long-term drought and most severe set of crop failures since agricultural civilizations began in the Fertile Crescent many millennia ago.”

In the same timeframe, nearly 75 percent of the most vulnerable Syrians, dependent on agriculture, suffered total crop failure. Herders in the north-east lost around 85% of their Livestock. In total, 1.3 million people were affected

In 2009, the UN and IFRC reported that over 800,000 Syrians had lost their entire livelihood as a result of the droughts. This led to a massive exodus of farmers, herders and agriculturally-dependent rural families from the countryside to the cities.

In January 2012, it was reported that crop failures just in the farming villages around the city of Aleppo, had led “200,000 rural villagers to leave for the cities.”

He made a convincing case for the connections – which makes action to minimise Climate Change all the more important.

J&P have action groups about both Climate Change and Peace & Nonviolence. If you want to find out more or do more then why not think about joining one of these groups?

Simply email jandp@dioceseofleeds.org.uk and we will let you know when they are next meeting (probably via Zoom).