A week on from today (20th June), I will be flying to Vienna from Manchester airport for the first MSP (Meeting of State Parties) on the Treaty on the Prohibition of Nuclear Weapons.

Since April, when I last wrote about what I’d been doing in the run-up to Vienna, our pre-MSP events have been coming thick and fast!

I mentioned before that at the beginning of this journey I knew that I wanted to learn more about the impact of nuclear weapons from a non-western perspective. 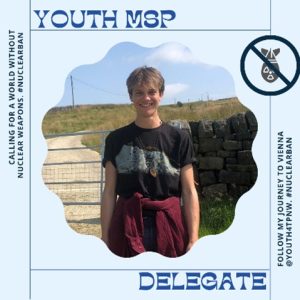 Since then, we have had sessions on Nuclear Weapons and the Pacific, and Africa and Nuclear Weapons. In these sessions I learnt a huge amount from speakers who were invited to join us, as well as from other delegates to the Youth MSP.

Discussions in these two sessions brought home the colonialism that is endemic to nuclear weapons. We discussed nuclear weapons-testing in the pacific, specifically the Marshall Islands and the toxic legacy left behind. The United States used the area to test over 50 thermo-nuclear weapons between 1946 and 1958. Local people were not evacuated from the island and were exposed to radiation. The US claimed that this was due to an unexpected shift in the wind. Yet evidence later emerged of Project 4.1 which said leaving people on the island would “afford valuable radiation data”. The Marshall Islanders experienced higher rates of cancer, babies had birth defects or were still born.

Project 4.1 demonstrates the hugely disturbing thinking behind nuclear weapons. The US used the Marshall Islanders as guinea-pigs to test the impacts of radiation. In 1956, the Director of the US Atomic Energy Agency’s health and safety said: “While it is true that these people do not live the way Westerners do, civilized people, it is nevertheless also true that these people are more like us than the mice.”

But the programme of pre-MSP events hasn’t just been about the impacts of nuclear weapons; it has also been about the practicalities of treaties and law. I have learnt the difference between different types of law (such as treaty and customary).

While I find this sort of information much harder to digest, I know that it’s important for me to understand how we can change things, and the processes that change will be channelled through.

During this session we focused on the additional protocols to the Geneva Convention, and it became increasingly baffling how the world is able to justify the legality of nuclear weapons when they so evidently fail to satisfy the conditions that so many countries have agreed to.

Our zoom session on this topic was only an hour so we focused on the conditions which prohibit warfare that cause:

For me, the most exciting thing that we’ve been up to has been compiling a policy document. This document presents suggestions about the role young people and future generations ought to play in the conversation. The document centres around youth education, inclusion and empowerment.

First, we were split into groups according to which area of policy we had chosen to be a part of. My group was to write about ‘Education and Agency’. Since the Youth 4 TPNW delegates are from all over the world, we couldn’t really meet in a café and discuss over a coffee! So instead, we made a group chat and shared a google document! Myself and five other young people found ourselves in front of a blank document that we had to transform into a policy document… but how?

I have never had an opportunity to take part in policy writing before, so this was a totally new experience. I was unsure of what a policy document really was: the format, the wording, and quite honestly, the point! Was this an exhaustive list of everything we could change? Or a selective list of recommendations? How comprehensively did we need to justify each idea? Did we need to begin by listing everything that’s wrong currently?

The rest of my group were amazingly supportive though. A couple of them had been a part of similar tasks before, mainly on the topic of climate change, so they were able to answer all my questions and provide insight into how I could contribute.

Each team had an allowance of 1500 words. We provided an overview, followed by an outline of what the current issues are relating to education and agency for youth in disarmament and non-proliferation, and then our recommendations to overcome these problems.

Our contribution was then added to the others into one final policy document, edited by the Youth 4 TPNW team. It feels amazing to have been a part of the team who have created this piece of work.

Our Youth MSP Conference is being held in the Austria Centre on Tuesday 21st June. To get into the building we had to register for UN badges! The following day, we will be taking part in civil society action, marching through central Vienna.

Over the past 6 months I’ve learnt an enormous amount and met some incredible people. I’m so excited for this next part of the experience: the actual conference! I’d like to say a huge thank you to the SPARK Project for funding my travel so that I can attend in person!